Axe of Salvation, Blood of Honor 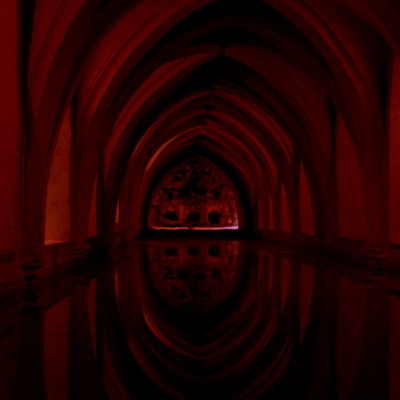 The line, formed from gray, shambling humanity, stretched down the cobbled street. The Midday Offertory Prayer typically finished within an hour, but was running long. Worse, it felt like the sun had already baked the inhabitants of Refuge after the first fifteen minutes waiting their turn outside the church. Sweat salted the donation marks on their throats, making the ritual even more delicious for the Vampires of Faith.

Unlike the others gathered, Edmund and Rose were not donating today.

“Edmund, I feel dizzy.” Rose, knuckles to her forehead, staggered. “This heat is unbearable.”

“Let’s get you some water, dear.” Edmund guided her out of line, through the gate, and over to the well in the cathedral courtyard.

Rose sat in the shade and fanned herself while he brought over a small cup of water. The couple waited until the crowd had completely turned over before exiting the opposite side, following the lethargic people fresh from their blood donation.

This was the fourth day in a row they’d avoided the Offertory. The two felt hearty, healthy, and warm as their strength built.

Strength enough to ascend the outer wall. They would make the climb and see Ruin for themselves.

The teachings of the Vampires of Faith claim two centuries ago a devastating battle was waged beyond the wall. Through great sacrifice, the vampires saved humanity from Ruin and oversaw the building of Refuge — the last stronghold of mankind.

Refuge was enormous, containing the farm district and livestock pens where most everyone labored, small homes, the Church of Faith, everything. Surrounded by a ten meter wall holding Ruin at bay.

Edmund and Rose shambled down the street leading to their shanty, careful to appear as weak and drained as the others. Tonight, they would be free of this prison.

They would prove the rumors true.

Rose stood at the corner, peering around the hovel, as she searched for anyone that might interrupt them. They’d found two abandoned homes tucked back in the outer neighborhood, backing up against the wall, and providing cover from nighttime passersby.

That had been his third throw. He should have worked the iron into more than a single hook.

“How much longer?” Rose whispered from her corner.

“As long as it takes to get over.” Edmund threw his hook again.

They both watched as it arced over the wall but, after a tug, flipped up and fell back to crash onto the roof of the left shack.

Rose shook her head at him and, turning back to watch the street, hissed, “There’s a Grey coming.”

Greys were zealots. Handpicked for their idolatry and tasked with maintaining order in Refuge among places the Vampires didn’t travel. According to rumor, they even donated twice daily.

“Oy! What do you think you’re doing?” The SCHLIK of a sword clearing its scabbard echoed through the silent streets. The only Refuge residents allowed access to weapons were Greys.

Jolted to action, he grabbed Rose’s hand and sprinted out of the alley before they were trapped.

Muscles pumping with blood-fueled strength, the couple streaked down the street. The wind slashed through their hair as they angled around the block to leave the Grey streets away. The speed and power Edmund now possessed was exhilarating. Inhuman.

The smile on Rose’s face told him she felt it too. They sprinted on.

Rounding another corner, they found themselves again at the well in the main cathedral’s courtyard. He’d been so caught up with his vitality, his legs had automatically run the well-worn path to the Offertory Gate.

They stopped to rest. To think. An alarm bell rang in the distance. Any moment, half a dozen Grey patrols would stomp through the gate.

“What are we going to do?” Rose, eyes wide and scanning, spun to face Edmund.

He froze. He didn’t know what to do.

Edmund had planned everything out. Thought he was ready. Yet there he stood, paralyzed, and staring at Rose. His escape plans, his bravery, and his confidence drained out his feet and seeped into the clay-packed dirt.

Rose growled at him. “You always do this.” She grabbed Edmund by the arm and dragged him to the well. “I’ve got a stupid idea. Get in.”

Taking the bucket rope from Rose, he locked eyes with her. “I’m sorry.”

The two climbed into the well and struggled down the rope as Greys stormed the courtyard above.

Five meters below the stone lip, a small tunnel opened into the well. Examining the outward slant of the opening, Edmund assumed it was some sort of runoff conduit in case the well overflowed. It became their escape plan.

“In here.” He pointed to the hole. “We can wait for the Greys to give up. We’ll even be home by dawn.”

Pushing off the opposite wall, Edmund flopped into the tunnel. With the slope steeper and the limestone slicker than anticipated, he slid, uncontrolled, for a terrifying handful of seconds before finally firing out into emptiness.

Three meters of open space and he splashed into a dark lake filling a large, low-lit cavern. Edmund kicked with his legs, pulled hard, and burst the surface.

The basin was enormous, entirely filled by the lake except for a ledge that ran along the far side, 120 meters away. A trickling drip somewhere in the darkness had been distracting him when he noticed the coppery taste of the thick, brackish water. Edmund realized it wasn’t water.

It was years of blood.

Edmund had climbed the ladder’s metal rungs until he could see into the hole in the cavern ceiling. Rose trailed close behind him.

After splashing into the lake of blood, they’d swum, buoyant in the dark, dense liquid, and finally pulled themselves up on the distant ledge. They had found the iron ladder, running up into the black above and had started climbing.

At the top of the ladder, drenched and dripping with blood, Edmund toiled up through the opening.

He entered a dusty room, dark aside from a sputtering torch in a sconce. Edmund bent and grabbed Rose’s blood-slick hand, helping her up into the room. They stood, soaked and anchored with dread.

“Where are we?” Rose asked.

“I think we’re below the cathedral.” Edmund worked the torch from its holder. “I’ve seen wall sconces like this during prayers.”

Flashing the weak light about the little room, they spied a door. “Let’s get out of here.”

Opening it, Edmund peeked around the corner. The passageway was formed from large-cut stone blocks with two other small, oak doors. It swept to a main set of brass doors at the other end of the corridor.

“This way.” Gripping her hand, their steps echoed down the hall.

Edmund gently pushed through the double doors, entering into a large sacristy. Desks, containers, and artifacts filled out the space while maps and tapestries, worn and depicting Ruin, hung on the walls.

A pale, corpulent figure in a desk chair flung around at their arrival, rising from his seat.

“Who are you? What are you doing here?”

It was a Vampire of Faith.

The monster lurched at a paralyzed, wide-eyed Edmund. Instinctively, he lashed out with his torch, catching the vampire across the jaw. The two tumbled into a pile on the thick carpet.

Edmund rolled the fat beast to the side and crawled out from under its still form.

“What happened?” Rose covered her mouth with a hand. “That’s a vampire!”

“I don’t know.” Leaning over, he pushed back the lips to reveal two long, sharp incisors. “It has fangs. It must be a vampire.”

“How… Is it actually dead?” Rose turned about the room, as if searching for some other reason.

Edmund leaned in closer to examine the teeth. They looked strange. He grasped and snapped off a piece of sharpened ivory exposing a standard tooth beneath. The fang was fake.

“Look at this! He’s got fake teeth. He’s just a man.” Edmund stood, displaying the ivory bit to Rose.

“Wait until you see this.” She ripped down a broad parchment tacked to the wall. “Look at this map. Edmund, we’re not the only city left.”

She was right. There were multiple cities marked on the map, some within a few kilometers. All named and numbered Sanctuary 63, Haven 64, Solace 66. They, apparently, were Refuge 65.

Rose glanced at the dead “vampire”. “What are we going to do?”

Edmund walked over to the large plaque for safeguarding the Steel Axe of Salvation used in the yearly ceremony. He lifted it off the hooks and tested the weight.

Rage finally bubbled up. No more hesitation. No more paralysis. He knew exactly what they were going to do.

He stalked to the inner door, the blood from the lake swim now a sticky brown, and kicked it open.

April’s Fantasy Faction writing contest on a dystopian society. You’re not afraid of a little blood, are you?