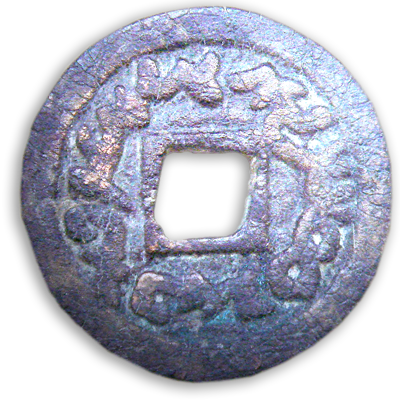 Reggie, watching the pile foundations as they were hammered into the ground for the new Waterford Commercial Building, turned and faced Jake.

Jake’s gloved hand extended out from where he was adding cement for the stabilizer in their little Kushlan mixer. He held out a small piece of metal in his palm resembling a beaten up, washer-like ring.

Reggie rolled his eyes and returned to the foundation work. His crew needed to have these piles in the ground and the formwork and rebar set up in the next 4 days. Because, like all construction downtown, things were tight the whole schedule through.

Reggie grunted, turned, and stalked over. He jerked the metal bit out of Jake’s hand and held it up to examine.

“I found it in that last bag of cement. It was still sealed.” Jake rubbed his chin. “Do you think it’s a coin?”

“No, asshole.” Reggie was pushing the disc around in his palm. “Coins don’t have holes in the middle.”

“But it has writing on it.”

“No kind of writing I’ve ever seen. It just looks dented. The hole’s not even round. It’s probably just some tag or washer that slipped in at the bagging factory.” Reggie tossed the worthless thing into their little mixer along with the rest of the contents from the cement bag. “Now, hurry up and pour that slurry. We’ve got that next pile coming and I want the damn thing stable. We’ve got to finish this foundation today.”

Jake’s nose twitched. Like he was considering fishing the worthless chunk of tin from a mixer full of wet cement. Finally, he sighed, tilted the drum over, and dumped the mixture into the hole.

Reggie lifted his arm and waved to the pile driving team, signaling the hole was ready.

Reggie collapsed onto the couch in the construction trailer that served as his office. It’d been a long week and felt like an even longer day, but his team had mostly finished the foundation. They had a couple more forms to throw together in the morning, but they would make their deadline. More or less.

The flimsy, aluminum door rattled as someone pounded on it from outside.

“Come in,” he hollered, exhausted.

The door screeched open, and Jake leapt into the trailer.

“Boss, did you hear about that trucker?” Eyes the size of hubcaps, he fanned his arm out wide, pointing to some spot in the distance. “The one what had his rig burned up. Him inside.”

Reggie shifted a little. “That’s too bad. Which trucker?”

“The guy what brought in our cement.”

“Huh?” Reggie sat up. He remembered the guy. Jaded and sarcastic, but hell of a work ethic. Those haulers always sit and watch his boys unload, but this one rolled up his sleeves and started throwing 80lb bags like he was one of them.

“Yeah. He was headed back west and his truck caught fire. Burned him right up. Black and crispy, even!”

“Yeah! For real! At least that’s what ol’ Jim Barnes was sayin’. I guess he knew the guy.” Jake still wide-eyed, bobbed his head, fists on his hips.

Grunting, Reggie leaned forward and grabbed his laptop from the counter. “What company did he drive for again?”

The clicking of keys paused as, face lit by the glow of the screen, he stared at Jake.

“Well, what was the brand of the cement? Cemex?” Maybe there was something in the invoices.

Scratching his chin, Jake shook his head. “Nah. It were Twig-something-or-nuther.”

“Here it is. Twiga Extra. That’s right. It was delivered by Heising Hauling.” Reggie clicked, scanned, clicked again. He kept at it for a few moments while Jake tapped his foot, sucking on his teeth with impatience.

“Oh, wow.” Flipping the screen around, Reggie pointed to the article. “Look. He burned right up in the middle of I-10.”

“On the side there. The thing about the ship.”

Reggie rotated the laptop back around and checked the related articles section. “Looks like a cargo ship went down a week ago. An engine fire, too.”

“Wait a minute. The ship had just dropped off cargo in L.A.” Reggie squinted. “No shit … Guess what it was hauling?”

Glancing up, Reggie said, “Really?” He swore Jake said things just to make him say that.

Jake shrugged. “Them bastards’re tryin’ to take my job.”

“No. Not illegals. It was carrying a load of Twiga cement. Fresh in from somewhere called ‘Dar es Salaam’.”

“I knew it! It’s them damn terrorists!”

“Probably.” Reggie nodded and clicked while Jake watched. “Maybe not. I guess it’s not in the middle east, but somewhere in Tanzania.”

“Where that devil from them Bugs Bunny cartoons was from?”

“No, that’s Taz-mania. Different part of the world. That’s over by Australia, I think. No, this place is in Africa.”

Lower-lip extended and looking thoughtful, Jake nodded as if that made sense to him.

“The Twiga warehouse in that Salami-whatever-city had a riot or something. Guys with guns, the employees, I guess, came in. Shot everything up. Everyone was killed.” He bent closer to the screen. “And, I mean everyone. It says here some stocker guys went crazy or something.”

“It’s them damn terrorists, I tell ya.”

“There’s more. This is talking about how the Twiga factory 30 kilometers away exploded the week before.”

“Really? Man, them terrorists got it out for our Twig friends, eh?”

“Maybe not this one. This says it was an explosion in their lab. Powdered limestone or testing chemicals or something.”

“Yeah, but them ISIS bastards will make a bomb out of anything. Could still be terrorists. They got any pictures of the dead people?”

Sighing, he handed the laptop to Jake and stood up. “I’ve got to finish up this transfer paperwork tonight, so I’m going to make some coffee. You want some?”

Brows furrowed, Jake stuck his nose in the computer and mumbled, ”Sure, sure. I wanna find out more about these cement terrorists. Gotta be alert, ya know.”

NEWS ANCHOR:
Our lead story comes to us tonight from the construction site of the upcoming Waterford Commercial Building where two men were burned alive in a freak accident.

Officials say the men, identified as Reginald Johnson and Jacob Williams, switched on a coffee maker when there was an electrical short, and the construction trailer they were in caught fire. Both men were killed before the fire department could arrive.

Construction at the site has been delayed until further notice.

When we reached out to the Waterford family for comment, they offered their condolences to the families of the victims, and assured the other workers that construction would continue soon.

NEWS ANCHOR:
Our final item of the evening is regarding the Waterford Commercial lot downtown. What might have been the third sale of the now-famous property has been postponed once again for tragic reasons.

Commercial real estate agent Derrick Smith has been found dead after plunging eight stories from where he and a potential buyer were inspecting the property. Witnesses say the pair climbed the scaffolding surrounding the unfinished building to admire possible views from any new construction.

Authorities have not yet released the name of the person allegedly interested in buying the property that some characterize as haunted, but they have the individual in custody for questioning regarding the incident. This is the eighteenth death associated with the Waterford property in the last six years.

We’ll bring you more as the story develops.