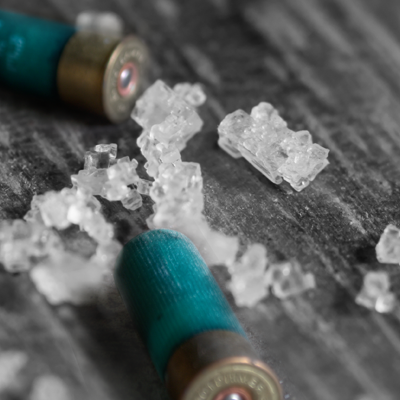 Hi there. My name’s Xerxes and I’m a demon.

Well, only half-demon, as the rest of my Hell-denziens keep reminding me.

You’ve probably never heard of me. I didn’t even get a footnote mention alongside the seventy-two in the Ars Goetia.

The lack of respect means I never get the good jobs. The interesting ones. Do I get to string the priest upside down above his alter? No. I’m the one, left behind, holding open the sanctuary portal, ensuring everyone returns to Hell in a timely fashion.

But not today. They’d finally let me come along, deeper into the city, beyond just the portal room. Why? They needed someone to hold a stupid door.

The sound of screeching tires, and a white ’73 convertible Ford Mustang peeled around the corner. Its wheels bumped up over the sidewalk, headlights sprawling across the alley walls, and blasted a pile of trash into the air as it slid to a stop.

I flinched, covering my eyes from the glare and scattering debris.

Furcas popped up out of the driver’s seat, sitting on the headrest, arms in the air, “Let’s go, Pink! I don’t want to sit in Purgs for seven years and seven days because you two are slow-mo.”

Like most demons, Furcas wore dark sunglasses, even in this early morning darkness. The extra tint did nothing to obscure a demon’s night vision, but they effectively hid our orange pupils from the world of man. If anything made Furcas stand out, it was his long, gray beard and black leather vest. He looked like one of those old rock stars from the ‘80s. But ten thousand years older.

“Don’t just stand there staring, Pinkie. Where’s Croke? Sun’s coming up in an hour, and we gotta blaze.”

I hated the nicknames. Pink. Pinker. Pinkleton. Hated my half-breed heritage. Hated the thought of an eternal life cursed by it.

“He’s coming,” I replied. “He’s finishing up his thing with that singer.”

Crokel really enjoyed torturing humans. He always took the form of an angel, glowing and glorious, so when he started carving, strewing organs all over the room, people tended to freak out. Which, of course, was his favorite part. That’s usually when he’d start in with the booming voice, all talking in twisty riddles. Bringing to bear the gravitas to make your mortal Shakespeare seem a chipmunk.

“Mighty Baal. Seriously?” Furcas slid back into the seat, leaned his head back, and revved the engine. “It’s amazing that Red don’t spend more time cooling his heels than he does.”

The downside of Crokel’s bloody pursuits? All his pompous dedication to his craft usually meant Crokel was the last one out the door. Which was why he wanted me along. Making wards against hunters following us.

I had drawn runes over the back exit from the club so that no human could cross it. Well, technically they could, it would just set them on fire. Instantly. From the inside, out.

We were just waiting on Crokel to finish with his little indulgence and then we’d be off to our sunrise safehouse. In the meantime, I stood there. Like usual. Still waiting, just holding a different door.

I verged on re-entering the club to see if something went wrong. Maybe Hunters had appeared. Maybe the bartender had found a shotgun filled with rock salt and exorcised him.

Crokel finally strode across my glyphs and paused to strike his favorite pose on the sidewalk, fists on hips, face leering skyward.

“Ah, Xerxes, the heavens weep at my artistry, their jealously ringing like the bells of St. Mary’s.” His wings unfurled, feathers glittering in the harsh streetlamp spotlight.

“Did you leave him on the bar?” I longed to help.

“Can we talk about it on the way?” Furcas revved the engine again. “I’d like to be back tomorrow night. I’ve got a date with a stripper over on Westlake.”

Motorcycles thundered up the alley. A gang of Demon Hunters burst from the same direction Furcas had just come. They must have tracked him.

Crokel dove into the passenger seat and, without waiting for me, Furcas stomped the gas. I sprinted ten strides and leapt, landing on the trunk, and clung to the retracted ragtop. We spun off, shredding around corners, and flying through the city streets.

Night streamed by, but Furcas couldn’t lose the Hunters. While his skill behind the wheel was supernatural, the bikers were good. And, they knew the turf.

Along a straightaway, a motorcycle roared up next to us, and the driver aimed his shotgun at our rear tire.

Shredded bits of rubber sprayed through the air. We lost traction and gouged the trolley tracks. The Mustang spun, caught an edge, and flipped sideways.

The car rolled, side-over-side, hurtling, and flung the three of us free. In the air, to the pavement, crashing into a store display. The Mustang rocked to a stop, perched on its side.

I sat up from where I’d bounced against the outer wall of Macy’s. A bit groggy, but otherwise fine. Being a Half-Demon had its privileges. While I didn’t heal as quickly as the full-breeds, I could still jump from the top of the Sears Tower and walk to dinner without being late. But, man, that would hurt.

I scanned to find the others. Crokel had destroyed a display of maternity dresses when he’d flown through its window. He tottered to his feet, and shook off the tinkling shards. Furcas lay a dozen feet from the car. He sat up and frowned at the wreckage. His beautiful car sat behind him, an ugly wall made from broken axels and a mangled transmission.

Four bikes, engines roaring, hurtled toward us. The Hunters.

Rather than stop, the lead biker dropped his ride on its side, throwing a shower of sparks behind him, and slid straight at Furcas.

The Demon growled. He lifted his arms and flames poured out of his hands, streaming at the oncoming motorcycle.

The hunter, mostly protected from the hellfire behind his sliding bike, didn’t flinch as he swung around a long-barreled, fat caliber handgun.

A sharp crack, the blue steel pistol jumped, and Furcas’s brains painted the oil pan. The rest of Furcas’ corpse wavered, then exploded into a million motes.

I glanced over at Crokel. He was trapped in the display, flinging shards of Demonbone at two of the bikers. They crouched behind their motorcycles, firing blind over the seats. Crokel had killed one already. His body lay on the sidewalk, pooling blood.

A hunter clipped the demon with a blast of rock salt, paralyzing Crokel a moment. The other human rolled to the side and leveled his cold iron crossbow at Crokel.

I blinked. It was only me now. I went to stand, but Mr. Silver Bullets strode up to me, fearless in his black leathers. His monster pistol held easy at his side.

Baal forgive my incompetence. My first mortal world mission and I was already on my way to purgatory for seven years and seven days. I closed my eyes and cringed.

Ow. That hurt. Right in the heart. But it was strange. Turning to dust didn’t really feel any different than getting shot with lead bullets. In fact, I felt my form healing. Had he run out of silver?

I cracked an eye and peeked at the hunter. He was inching backwards, staring at his weapon. He leveled it again.

“Ow, damn you,” I shouted at him. “Knock it off.” The holes closed, and one of the bullets pushed its way out of my chest. I caught it.

Silver hadn’t destroyed my mortal body? What in the nine hells?

And then, I had it. My human half.

Humans weren’t allergic to silver or salt. Demons couldn’t be killed by standard means. Turned out, I had taken the best from each breed. I never knew. Was never tested. Everyone simply assumed weakness because of my human half.

I grinned. Wide and demonic.

Then, I casually tore that hunter in half.

The little motel room was cramped and dark, lit by the only working lamp.

Charlie, laying on the bed, sharpened his cold iron machete and watched the 11 o’clock news. Frank sat at the tiny desk and loaded salt rock into shotgun shells. That left Father William perched over the nightstand, chanting under his breath, blessing canteens of water.

The room’s door exploded. Literally exploded. And a dark figure loomed in the hole.

“Hi there.” The voice was almost jovial. “My name’s Xerxes, but these days, most Hunters call me Demon-X. You may have heard of me.”

The demon stepped across the salt barrier and into the room.

Urban fantasy entry for the January Fantasy Faction contest. But, wait! Since it’s “new year, new you”, we’ve added the start of a new life to this one.