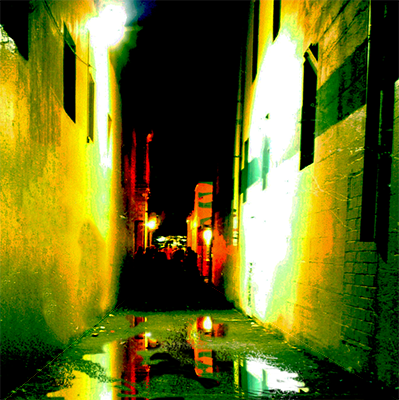 The double doors on the breezeway swung wide as Jordan strode through to the ground-floor atrium of Jefferson High School. It was Monday, and he was ready for his biology exam. He’d never felt more prepared for a test.

Glancing down at his watch, he made note of the time, 7:58 AM. He still had two minutes to walk the paltry 30 feet down the hall to Mrs. Beale’s room before the bell rang. He started whistling the chorus from Good Times.

Laughter broke out and stopped his tune. At first it was a few titters and giggles, but soon the long, loud belly laughs boomed through the chamber.

Standing in the center of the large atrium, Jordan glanced up to the balconies above. Rows of students lined the railings, pointing and laughing at him. Along all three floors.

Shouldn’t they be in class?

Looking down to check the time again, he noticed his pants were gone. Jordan frantically patted his chest and sides — He wore only underwear, the stupid purple ones from his grandmother even, as everyone stared at him. Worse, there wasn’t time to race home and change before his test.

Hell, looks like I’m taking this test in STYLE.

Music kicked on over the P.A., and Jordan started doing the electric slide, shuffling and spinning right out of the atrium and down the hall. Heads bobbed. Girls swooned. And applause followed him all the way into Mrs. Beale’s.

Jordan walked along the boardwalk with Chrissy, arm-in-arm, and enjoyed the soft glow of the street lamps. It was quiet and they were in love. He couldn’t wait to marry this girl because she was the first one who truly understood him. Supported him.

They stopped by the benches on the pier. It was a sleepy spot where they could be alone. Looking up at him, Chrissy’s eyes glittered with adoration. She was incredible. And she was his. Jordan brushed a wisp of red hair from her face and leaned in to kiss her.

The voice came from behind him. Jordan spun, stepping in front of Chrissy protectively, and saw the grubby man pointing a pistol at them.

Without a moment of hesitation, Jordan dug into his pockets and yanked out a wad of ones and fives. He shoved the wrinkled bills at the mugger, and lifted his hands in the air.

“That’s all you got? I guess you’re gonna have to watch me take some from your girl. My way.” The man pointed the gun at Jordan’s face and thumbed back the hammer. “Get on your knees. Now.”

This is NOT happening.

Jordan swiped at the gun, fast and clean, with his left hand, fingers wrapping over the top of the barrel, and twisted the weapon back toward the mugger. At the same time, he landed a savage kick to the man’s bladder. The creep grunted, and released his already-slipping grip on the pistol. Ripping the weapon away, Jordan smashed the butt into the robber’s face. Blood erupted and the man crumbled to his knees.

“You won’t touch my girl, bitch.” Jordan aimed the pistol and the man’s head.

The view was exhilarating. Standing on the ledge, Jordan staggered at the height. It must have been over 150 stories of empty space running down glass windows, terminated at a sidewalk covered in ant-like pedestrians.

Jordan lifted his palms to the sky, basking in the fresh air and sunshine. It was the start of a beautiful day and he shone with life.

A sharp shove sent him tumbling from the rooftop and the world spun.

Terror draped thick over Jordan and he wailed as his body whistled through morning sunbeams, spiraling toward the unsuspecting strangers at the base of the building. He screamed until he had no more breath, and choked on the rush of wind battering at his face.

The fall was far. Still only halfway to the streets below, he had a few seconds left to steal.

Noticing four awnings making a neat row off to his right, he knew what to do. Body steeling, he spread his arms, caught the breeze, controlled his fall, and almost glided.

I’ve got this. INCOMING!

Jordan burst through the first awning, snapped through the second, ripped the third, and peeled the fourth from its supports. He finished with a muffled crunch as he thumped into a dumpster.

Disentangling from the ragged canvas clinging to him, he pulled himself up and out of the trash. He leapt down to the sidewalk, and bobbed his head to the gawking onlookers.

Jordan stormed through the alley, feet stomping puddles and refuse. As he cut through the drizzle, he struggled to remember what he was running from. He only knew it terrified him.

A groan echoed around the corner ahead of him and he splashed to a stop. Jordan glanced back as snarls rolled along the walls from the direction he’d come. He was trapped.

There has to be a way out.

Frantic, his head pivoted as he searched, shuffling side to side, from wall to wall in the tight back street. There was no where to go. No windows. No fire escapes. No doors. It was solid brick to either side.

Another growl and his attention snapped to the mouth of the alley and the shadows lurking at the corner. Spinning to face the opposite end, he watched angry dark figures pierce the light spilling from a cross-street.

Instead, Jordan looked for a weapon in the strewn garbage, anything of use in defending himself. In his sweep, he noticed a dumpster he hadn’t seen before and his hopes spiked high.

I can hide in there.

He rushed over, threw open the lid, and a figure shot up from the darkness inside. A snarling, rotted monster with greasy hands grabbed at his head. Jordan lurched backwards, tripped, and flailed to the asphalt.

The zombie crawled slowly from the trash bin, as Jordan splayed in a puddle, paralyzed with fear. He needed to get up and run.

I HAVE to get out of here!

Both openings of the alley were filled with zombies now, huge crowds at either end, shuffling toward him. Back in the dumpster, another decayed face appeared and started crawling out. Then another. And another.

The first one, putrid and dripping ichor, reached out and dug torn, yellow fingernails into his leg. Jordan couldn’t pull away.

Jordan stormed through the alley, feet stomping puddles and refuse. As he cut through the drizzle, he struggled to remember what he was running from. He only knew it terrified him …

“See? There’s an art to it. Agility and art.” Dr. Keltzer stepped back, hands on hips, and admired his work. “The resource’s heart rate is back up to 153 BPM and the LEDs are all green.”

He tapped out a cheery rhythm on the tile floor with his Oxford, and eyed the nearly 50 foot long wall containing all of the fright-bays for Quadrant 34D. The bays were laid out four high and sixteen wide, and all but this one thrummed happily along.

“Now, we lock it in.” The doctor punched a few keys to commit the nightmare to the JCF-488’s memory bank. Turning to the technician originally operating the station, “However, make sure you’re throwing in slight variations now and again. That will help keep its mind off balance.”

With the final keystroke, the hydraulic lift whined and Bay-28 glided up and back into its Baysocket. The human clone quickly joined its 63 neighbors in comfortable productivity.

“Which other resource did you say was at struggling with output?”

“That low? Goodness. Let’s hop in the cart and head over. Maybe see if we can craft a better nightmare or two, shall we?”

March’s Fantasy Faction monthly contest under the theme of Nightmares. It’s an avalanche of your worst fears — with a twist!