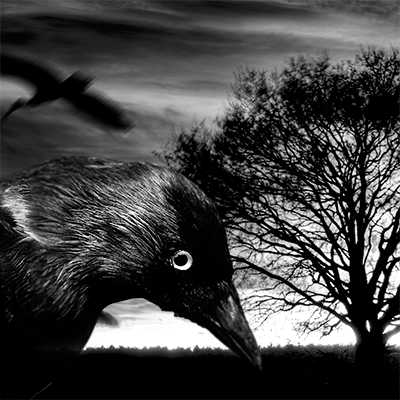 The burden of recognizing omens brings with it black and sticky work. Especially when you read the dark lines between. The ones that demand death.

As Shelam’s hunter, death is the work I’ve always done. On this grim night, the omens I track reveal themselves to be especially viscid. They’re wet and sullen. While the threads joining them sag, loose and hanging.

They mourn because a devoted life has been taken. The balance upset. In order to relieve the distress, three lives are owed as payment, else the world will spin out of equilibrium.

I stop walking and listen for the scuff of boots in the alley. I’ve lost him for the moment.

Earlier, the rolling thunderclouds had gone blood-red as the sun set, portending the labor ahead of me. The storm had raged, booming and heavy, but all I hear now is the steady drip from a corroded gutter, bloated with runoff from the evening’s downpour.

Moonlight reflects off the mud and drainage, streaming across my bare foot. Here, even as I struggle in my pursuit, another sign shows itself.

A cat hisses. A bottle rattles. My prey is on the move ahead, entering a doorway. The omens are persistent.

I wrap my habit tight around my body, to quiet any rustle, and slip in behind him.

By murdering the votary of Shelam, the man guaranteed my attention. Justice demands him punished for his deeds. Requires his blight scourged. I am but a vessel through which She works.

The hallway is dark, cramped. He fumbles at a lantern at the far end. Something hisses, and light drenches the corridor, yellow and sour. The smell of urine is strong.

He turns, too late, and opens his mouth to yell. I’m there, and my knife slides into his kidney, my hand pushes up on his jaw, closing his mouth, and bangs his head against the oak stanchion. He tries to squeal as I pull the blade free and punch it deep into his lungs, then his heart, and finally, as he crumples to the damp floor, his neck.

I extinguish the lamp and darkness returns to the hallway.

Wiping my knife on his trousers, I slip back into the alley, trusting, as the omens promised, the rain to wash away any trace of my passage.

One of the lives has been remitted, but the presage still requires two more tonight.

The ground, cold and slick, feels brisk, even refreshing under my feet as I pad toward the sounds of the inn. The wind cuts through my garment. A chill suddenly rends the night, unerring and just as the omens foretold. I look up as a crow flies south and a star shoots east. All is as it should be.

I stand under the sign outside a large wooden building, The Two Rabbits Inn. Another omen telling of death for the woman and her babe on the second floor.

The door cracks open, then pulls at my hand, like a wooden sail caught in the wind, dragging me inside. Straining, I use all my weight and push the door closed with a thump. The momentarily interested patrons soon bend back to their mugs, unaware and unintimidated by an unattractive woman in acolyte clothing, adjusting her robe and walking to the bartender. However, the curious, scattered glances do not cease completely.

I receive a mug of watered wine and sit on a stool near the end of the bar and watch for the signs.

The cry from a baby draws my attention to the back stairs. It is almost time.

A man gets up, claps his companions on the shoulders and walks to the door, daring to challenge the wind outside. As he struggles to pull it shut behind him, a small rat slips around the corner of the doorframe, and follows the man out into the night. The door closes, and an owl hoots.

Standing up, I head for the stairs, my cup untouched. Again, I wrap my habit close, leery of it snagging on the banister.

Upon reaching the second floor, I head for the second-to-last room. Low murmurs and the intermittent cooing of a mother originate from the other side of the scarred oak door. Again, the omens are clear.

I still myself and close my eyes, perching outside her room. It will just be the mother and the child. The swirling milk in my tea that morning had promised it.

The handle moves easily in my hand, as I knew it would. I enter and the woman on the bed looks up, no doubt expecting to see her dry nurse.

“She’ll be along shortly.” The omens say so.

The room is well-ordered. The luggage and travel basinet are of quality. The woman comes from a mercantile house, a family with enough money to be comfortable, but not enough for any substantial influence.

Even if her father had the proper influence, it wouldn’t have mattered.

She fidgets with her son’s tiny hands, obviously considering speaking again, while I watch the lone candle on the night stand. A door bangs open downstairs, the flame gutters, then snuffs to a thin ribbon of rising smoke.

In a swift motion, I snatch the boy from her arms, gripping a pudgy leg, and smash him, wailing, to the floor. The infant’s cry cuts off sharply and the woman screams.

My blade is out before she can scramble from beneath the bedsheets. I kneel, and after an exacting stroke, the now-silent baby’s throat is laid open. Absolute finality is required.

Quickly, I stand, and stride from the room. The mother lunges, collapsing to the side of the dead child. She wails incoherently between sobs.

In the hall, another woman, the child’s nurse, streams by me, racing to the room. The expected shriek of horror crashes past me, sharp and jagged.

Down in the common room, the inn is now a bustle of bright lamps and noise. Most men cluster and chatter like schoolchildren. Two charge up the stairs, scrambling towards the screeching women. I step lightly to my stool, sit, and wait for the next sign.

While the child had done no wrong, it had been his unfortunate destiny to be birthed at the very moment the murderer had taken the life of my goddess’s votary. Shelam, Mistress of Signs, requires recompense, and it must be paid to maintain order.

They return, cascading down the stairs with eyes wide, and shout, “The woman! The woman priest! Where is she? She’s murdered a baby!”

I watch as the horrified barmaid, standing near the base of the stairway, spins and thrusts her finger in my direction, “She’s there!” At the motion, the tray she’d been carrying jolts sideways, and a brass mug of dark liquid tumbles to the ground. I stare as the cup strikes the ground, upright, and not a drop of its contents spill.

I smile at the omen.

A man at a nearby table shouts, “Witchcraft!”

The door to The Two Rabbits Inn bangs open again and a small host of City Militia file in. Their leader, a lieutenant, steps forward, dark eyes casting about for the source of what drew them out on such a rain-slick evening.

He spots me, and immediately identifies me as an important figure in the drama playing out. He pulls a well-worn saber from where it had hung by his side. He flips a silent signal to his men, and they spread to cover exits. Two of them rush the stairs, swords in-hand.

Comfortably in control of the room, he barks at the crowd, “Damn you lot. Back up. No one leaves The Rabbits until I have some answers.”

I pull my knife, one final time tonight, and feign to strike the Lieutenant. It is futile and obvious, but the debt must be paid quickly. We cannot wait for the court’s justice to repair the dangling threads.

The Lieutenant is skilled and swift. He knocks aside my assumed attack and strikes, stabbing the tip of his sword neatly between my ribs.

The crowd, as one, bites off a sharp breath.

Mine accounts for the final death, my soul now saturated with the thick guilt that comes with murdering an innocent child. Innocent life paid for the innocent life taken. Guilty owed for guilty.

The pact is complete, the world rebalanced.

April’s Fantasy Faction theme for their monthly story was “Omens”. I went grimdark, and first-person-present. Crazy!