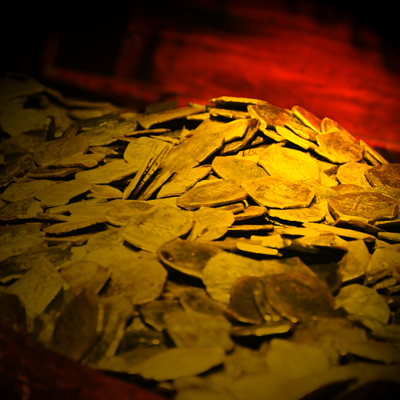 “Why can’t we skip straight to the ‘X’? We know where the pirate treasure is. We can see it on the map.”

“It’s about the journey, man! We’re gonna do this right.”

Terrance stopped pushing a vine out of his face and stole a backward glance at their little boat, beached and empty. Not only was he sure to regret all of this, but he would probably get bitten by a disease-laden insect. Turning in the direction of Will, he tossed the vine aside and trudged on, “But, the guy had a dozen other maps, for crying out loud. He was wearing a hoodie.”

“That’s because you didn’t notice this map was different than the others. Unlike this one, they all had duplicates.” Will winked at Terrance, tapping the side of his head with his index finger, “But, I noticed.”

The two men halted in a clearing — Will, hands on hips, grinned at the choking foliage, while Terrance, wincing, stretched his back with a groan.

“I think we’re here.” Will approached an outcropping of dense scrub.

“Huh?” Terrance studied the glade as Will pawed through the leaves.

“Aha! We are.” Will, gripping the machete, pulled back a handful of branches and lopped them off. “Look at this.”

It was a wide stone wall. Now that Terrance got a good look, it stretched upwards, lost in the tree canopy. Thirty or forty feet of jungle-covered granite.

“It’s about the right shape, I guess. And, it’s certainly big enough. So, sure.”

“Whoa … Check this out.” Will was clearing moss and clusters of leaves from the base of the now-recognizable obelisk. There was some sort of animal carved into the stone, about knee height from the ground. “A monkey.”

Terrance glanced at the map. “I don’t see any monkey symbols. Are you sure this is the right place?”

“Of course. It’s not like giant, carved towers pop up naturally in jungles. I’m absolutely sure.” Will rolled up the map and shoved it into his back pocket. “North, we go.”

“That’s the dumbest thing I’ve ever heard.” Dripping with sweat, Terrance swung the machete and attacked the damp undergrowth.

“It’s only dumb because you’re not rich. When we find all that gold, I’ll be able to afford any medicine or medical procedures I’ll ever want.” Will upended his canteen and gurgled down a mouthful of water. “That means, if I want to only eat cinnamon toast, I can. I’ll just take vitamins, and if I get fat, have doctors suck it all out. Problem solved.”

“No. You can’t. Your body will, like, dissolve or something. You need vegetables.”

“That’s what the vitamins are for.”

Terrance stopped talking. He continued hacking at the vines, imagining they were the synapses in Will’s brain.

“When you’re rich, you can do whatever you want. I mean, you’re probably going to do something lame with your half of the treasure. Like, buy a library or something.”

“Yeah, sounds like something you’d do. Libraries don’t make any money, so you can write it off on your taxes.”

“Aside from libraries being public property that’s paid for by taxes, if it’s not making any money, there’s no income to tax, so no write-off to be had. That’s almost as dumb as the cinnamon toast thing.” Terrance turned back to lopping vines with almost-taxable vigor. His thirty minutes were almost up, then it would be Will’s turn to swing the stupid machete. “No, I’ll probably invest my share of this non-existent gold.”

“People like libraries. Or buy a city park. Just not a pub. The food cost alone would sink it.”

“That’s not how any of this works, Will. Assuming we find a buyer for these priceless gems and jewelry, the government is going to take out a bunch in taxes …”

“See? I told you. Tax deductions.”

“… And I’ll invest the rest. Probably live off of dividends or the principle or something. That way I’m not …”

Will halted, then ran ahead. “There it is! The canyon!”

Terrance gave up. He was thankful for the rest, but at this point, he almost hoped Will would tumble over the edge. His hand twitched. One little shove.

The “bridge”, swaying in the wind, sagged across the canyon in front of them. Far below, a river frothed through the gorge in jagged switchbacks, hungry to swallow travelers stupid enough to try crossing the rotted planks.

Terrance scowled at Will. “Are you kidding me?”

Will shrugged, “What? You wanted adventure.”

“No, I didn’t. You did. We’re going to die the moment we set foot on that bridge.” Terrance pointed to the bridge as it curled and flipped in the wind. “And I’m going to scream your middle name to the entire world the entire time we’re falling to our deaths.”

“Whoa, easy. There’s no need for threats.” Eyebrows high and eyes wide, he faced Terrance, and pointed. “Besides, see? There’s our monkey friend. We’re going to be safe as a babe in a barrel.”

Terrance sighed, ignoring thoughts of babies trapped, suffocating in a barrel of oranges. Or nails. Or diesel. Instead, he glanced down to where Will gestured, at the base of the wide stone pillars where the various ropes from the bridge attached. Indeed, there was the same monkey figure from the first marker, and it was carved into the rock near the cliff’s edge.

“Seriously, we could have skipped both Bug Jungle and Wet Noodle Bridge. And, we’d have already been here by now.” Standing in front of a dark hole in the base of a cliff, Terrance jerked a thumb over his shoulder. “Our boat is beached about half a mile that way.”

“But think of the fun we’d have missed.” Will hunched, and crept into the darkness.

“You mean the malaria we’d have missed?” Terrance followed close, hand on his friend’s back.

“How about zika? I hear you can get that from bats.”

Something small winged by their heads, screeching, and they toppled together, slamming against the wall, and nearly fell to the rocky floor.

“When we get back, I’m telling your mom that you’re being a Negative Nelly again.”

“I’m telling your mom you’re trying to make your own decisions again.”

“Well, I’m telling your sister … Wait. Is that torchlight up ahead?”

As the two shuffled forward, Terrance watched as the flickering grew more distinct. It was definitely a torch, like one from the movies, and it was clipped to the corner, before the tunnel widened into a large recess.

A man stood at the edge of the firelight, pointing a pistol at the two of them.

Will scrubbed his face with his hands and mumbled, “Oh yeah, I forgot. I may have shown the map to Frank before we left.”

“I guess unlike you two, I came straight here, and expected you guys to already have the treasure. So, I brought this —“ Frank twirled his gun. “— That way I could take it from you. Instead, I can use it to make you carry all my gold for me.”

“Good going, Will.” Terrance flipped his leg out and kicked Will in the shin.

Lowering the handgun, Frank shook his head and turned to continue along the dark tunnel beyond, “‘X’ marks the spot, boys.”

Frank clicked on the flashlight in his other hand, and vanished around the first bend. “I’ll be right back, so don’t go anywhere.”

With him gone, Terrance glanced around the tiny cave and noticed, for the first time, the ornate ‘X’ carved above the tunnel where Frank had disappeared. He pointed at it and growled at Will. “Bonehead, not only did you show him the map, but we should have just come straight here.”

Staring at the ground, Will shuffled his feet.

A scream, loud and strong, ripped through the tunnel, ending in a sharp, snapping sound.

The flashlight Frank had been carrying bounced back out of the mouth of the tunnel and rolled, forcing the cavern walls to swim and weave in the light until it finally rocked to a stop. There, exposed by the beam, was a smaller crawlspace behind Will, hidden in the shadows, on the opposite side of the carved ‘X’.

The entrance had the same monkey etched near the bottom of the opening.

Terrance and Will faced each other, their open-mouthed shock simultaneously turning into wide, toothy grins.

Will bent, scooping up the flashlight, got down on this knees, and plunged into the hole. Heartbeats after he disappeared from view, an echo tumbled out of the small opening, “Holy mother of … Get in here! We’re rich!”

Terrance glanced at the other opening. “Sorry ‘bout that Frank. Everyone knows you never go straight to the ‘X’.”

Why do you follow pirate treasure maps instead of skipping to the end? Find out in September 2016’s Fantasy Faction monthly contest story written to the theme of Pirates.