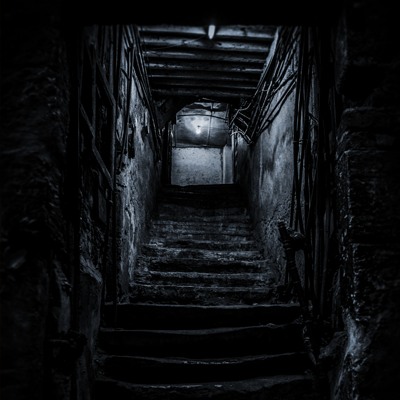 The girl stirred from where she was lashed to the bed posts. Lying face down, she shifted on the stained mattress, groaning as she recovered from the trichloromethane. Bojan, arms folded, decided she was probably 12. Maybe 13. Exactly what he needed.

The basement room in the dilapidated two-story was dark and sparse. The copper smell reminiscent of what happens in this room. A bed had been shoved against the opposite wall, with a lone, narrow table just inside the door. The girl’s backpack had been flung beneath, and an oil lamp flickered on top.

After the grab team had finished strapping down her limp form, Bojan had considered removing her clothes, but had decided he couldn’t stomach stripping the child himself. And the thugs would have asked for more money had he made them come back and do it. That was extra money he needed.

No, the Colonel was going to have to deal with a fully-clothed victim. The sick bastard probably preferred ripping their clothes off himself anyway.

“Wha …” The girl opened a blackened eye and mumbled.

Bojan waited by the open door.

“What happened? Where am I?” She pulled at her restraints, trying to get her head around to see the rest of the room. Confusion and fear in her voice. “What’s going on?”

“Shut up, whore. Stay quiet or I will cut you.” Bojan had mastered softening up the girls before his clients laid into them.

He dropped his arms to his side as she flexed, red-faced, taut, and straining hard on the lashings. After a moment, she gave up and stopped struggling. For a brief second, Bojan had thought the old bed post might have given way. She was strong for a little girl.

She lifted her head and whispered, voice breaking, “Please, just take me back to Kneza Mihaila. My family … They’ll be looking for me.”

“You were alone. We were watching.” Bojan took a step toward the bed and kicked the post with a heavy boot. “You belong to us now.”

She dropped her face back into the spotted mattress, hair showering across the back of her neck, sliding off her shoulders. Had she a future, she might have eventually grown into a beautiful woman. Such a shame. It was days like this when he felt the uncomfortable prod from regret. But, he’d already made his decision. He was sticking to his plan.

A knock on the doorframe behind him caused Bojan to turn around. It was the desk man, Nikola, with his strange, black-on-black eyes. “Yes?”

“The Colonel is in the waiting room, sir. He’s getting agitated.”

Bojan glanced back to the girl. She hadn’t moved.

“She’s not ready yet.” Digging in his coat pocket, Bojan produced a glass vial sloshing with an amber liquid. “Here, give him this.”

“Tell him it’s a ‘Love Potion’. Feed him a line about it being an ancient formula. From the cradle of humanity or something. Whatever.” Bojan shrugged. “Just make sure he knows it takes fifteen minutes for potency. Tell him it’ll increase his stamina. I’m sure he’ll like that.”

The man nodded, lips puckered and scratching his chest.

“That should give me enough time to get the girl crying like he asked.”

At his words, she lifted her head again and strained to see who he was talking to.

Nikola bobbed his head again, avoided her gaze, and hurried out of the room, love potion secured in his fist.

She seemed to relax. “Why are you doing this?”

For a child, perched yawning over the precipice of ruin, she was calm. Again, he questioned his motives. He questioned his need for escape. If the ends justified the means. For a quiet life hidden in the hills of northern Italy. This last job would give him enough money to survive until the olives started coming on. Then, he would be free.

His face hard, he ground out the words, “Because I’m evil, girl.”

“Speaking of, I need my medicine. I have to take it every day. It’s in my pack.”

“I promise it won’t matter. Because you’re not going to live long enough to care.”

“And, I promise you will care if I don’t get it. It’s going to come spraying out of me, all messy-like.”

Bojan, hands on his hips, took a deep breath, counted to three, and exhaled. It seemed he wasn’t going to make this one cry.

“Fine. I’ll get your medicine.” He bent and rummaged through her bag. “What’s it look like.”

“It’s that pink bottle. The one that says ‘Pepto’ on it.”

Snatching the container from the bag, he stomped over to her bedside. “This one?”

He unscrewed the cap and poured most of it out on the ground next to the bed. Closing the cap, he tossed it back over by the table.

She glared at him.

“Scream and puke all over him. I don’t care.” He stalked back to the still-open door.

“Just remember. I warned you.”

Over his shoulder, “Shut up, bitch.” One more day. Just one more day.

Leaning out the door, he shouted down the hallway, “Nikola! Bring the Colonel back. He’s going to have to break this one himself. Maybe he’ll like the challenge.”

Bojan leaned against the doorframe and waited, watching the girl tied to the bed, hoping she would spontaneously errupt into sobs, wondering why she didn’t. Wondering why it made him nervous. After a moment, he heard the rhythm of stark bootsteps echoing through the hall.

“I promise. If I don’t get it soon, the Colonel isn’t going to love me.”

Bojan opened his mouth to reply when a thick accent behind him filled the room.

“How could I not love you, dearest?” The Colonel, grinning at Bojan, entered and started unbuttoning his shirt, exposing a sweaty undershirt beneath, and crept up on the girl as if she was a skittish doe, ready to bolt, and not a child tied to filthy bedding.

The girl made a sudden, violent retching sound and he stopped moving. She convulsed, pulling fiercely at her bonds, and made the noise again, this time wet and horrible. The Colonel turned his bald pate and gray mustache toward Bojan, about to ask what was happening.

What happened was everything went sideways.

The girl tugged one last time, bending the metal bed posts, her restraints parting like they were egg noodles instead of leather. She sat in the middle of the bed, facing them, grinning wide. Eyes wide. Everything was too wide.

Her mouth opened, jaw impossibly unhinged, revealing an opening into which Bojan could have easily slipped both his meaty, unclenched hands. But, it continued opening, her lips folding back over the girl’s head, almost as if she was turning inside out.

As her face unfolded, reverse-swallowing her tiny body, she began bloating from inside, piles of sticky pink and red blossoming out of the hole and growing in size, swelled out past the edge of the bed.

The thick tentacle, once the little girl’s tongue, shot out and wrapped the Colonel’s arm, constricting. Squeezing. A sharp, whiplike snap shot down the length, and the man’s arm tore from its socket, leaving an empty, gore-squirting hole where his shoulder used to be.

No longer a child, the beast continued to swell, filling the room. More tentacles, thick as 100-year oaks poured out, lashing wildly, pulverizing clay, brick and foundation alike. More than a dozen. More than two dozen. All jerking around, like giant, loosed firehoses.

One swept Bojan’s feet out from under him, powdering the bones in his legs. He fell, losing sight of everything except the swelling monster in front of him. Mouth agape, he could do nothing but stare.

Two massive, stump appendages formed beneath the creature, each with thick tentacles completing a flailing, paw-like foot. Big around as the now-flattened bed was wide.

The mass soon filled the room, pressing out the walls and ceiling. Plaster, wood, and brick rained down on Bojan as the thing rose into the air, exploding out of the building.

The last thing Bojan saw was the chimney collapsing on top of him.

Faustina, blonde once more and naked in the morning sun, examined the carnage around her. The building had been torn down, pulverized to almost nothing. The earth scarred. Wildlife fled.

Luckily, because of their business requirements, there were no nearby neighbors. She’d tried to warn them about her medicine. They didn’t know it was only in the pink bottle because that made it easier to get through customs.

Granted, if she was honest with herself, she hadn’t really felt the need to explain that part.

August 2016’s Fantasy Faction monthly contest story written to the theme of Potions and Elixirs. Also, with the added challenge of being dark.