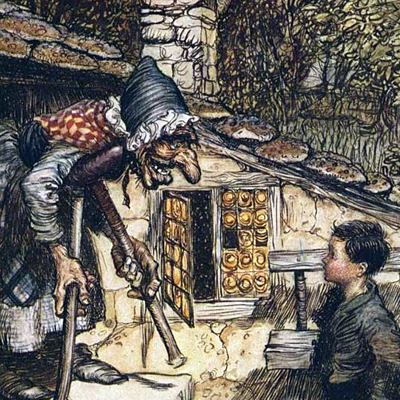 She swooped through the boughs, leaves and branches rustling as her wings beat them to the side. Alighting on a low oak perch, she spied a child skipping his way down the trail toward where she sat. She started preening her feathers.

Not now, she told Theo, I need you to be ready for the child. The white crane squawked and refocused its attention on the boy, now poking a stick into a rabbit hole.

The minds of birds were fickle things and tended to wander.

Back in her candied cabin, the witch rocked in her favorite chair and reveled in the child playing. Her own sightless, red eyes closed, she relied on Theo’s for the hunt. The boy, plump and well-fed would be a perfect treat.

From her cottage, Rosina twitched a finger and in the trees, the bird, Theo, plucked one of the sweets from its harness pocket, and dropped it to the trail near the boy.

She saw the youngster pause, blink, trundle over, scoop up the sweet, and pop it into his mouth.

Theo had half a dozen of the confections lashed to his body. The boy would be hers within the hour.

“What’s your name, child?” The witch, nearly sightless and with her head cocked, posed the question through a crook-tooth grin. They sat at her little lunch table.

“That’s a lovely name. William, don’t you think my home is marvelous?”

“Yes, ma’am. It’s very nice. I’m sorry I ate part of the shutter. I just couldn’t help myself. Did you know it’s made of gingerbread?”

“I did indeed. Don’t worry, William, we can fix it later. What matters most is what you thought of my secret gingerbread recipe.”

“Oh, I loved it. I did!” The boy clapped his hands, excitement shining as he eyed the glaze-and-candy fireplace. William, now confident he wouldn’t be scolded, turned back to the old woman and licked his lips. “May I try some more, please?”

“Such a polite boy.” Rosina turned and hobbled, half-blind with her wooden cane tapping the way, towards the rear of the sugar cottage. “In fact, I need your help clearing out a few treats and making some room in the candy cellar. Would you like to follow me?”

The two exited the witch’s small home, walked past the vegetable garden, and approached a single, iron-banded door, angled as the entrance of a stone cellar. Rosina produced a key from her pocket and fumbled the lock open.

“This way.” She beckoned William to join her in clacking down the hewn steps and into the sputtering shadows below. “I have to keep the sweets deep in the chill of the cellar so it won’t melt.”

One last glance around the garden, a quivering smile, and William entered the thick door behind the old woman.

The witch Rosina sat at her table, a platter of fresh-picked vegetables in front of her. Centuries spent living in a house constructed from candy had destroyed any sweet tooth she might have possessed. Her cravings ran more along crunchy cabbage and radishes, and she left gulping down fish and the scattered critters to Theo.

As if on cue, the white crane stabbed at a herring and swallowed it whole.

She cleaned up her lunch and prepared William’s. Cake, tarts, candied pecans, gingerbread and chocolate sandwiches, all washed down with maple-laden milk — filling a plump little boy’s wildest desires as well as his belly. He’d avoided the treats the first day he was in the cage, but hunger finally pushed him to devour more and more each day since.

Taking his tray down in the cellar, she slid aside the little iron access door and slipped the platter through the slot. William tore into the sugary snacks, devouring the chocolate first. She’d discovered it was his favorite.

“Don’t worry, dearest William. As soon as you finish helping me clean out all my leftover treats, I’ll release you.” She bent, her gnarled teeth showing through the snack door as she spoke. “You’re the only one who can help me.”

“I’m helping, I’m helping.” Tears streaked down round, ruddy cheeks as he pushed a frosted cake into his mouth.

She hadn’t lied. She needed his help. Securing the cell again, the witch turned and descended deeper into the candy cellar.

Spiral and torchlit, the stony stairs looped into the darkness. As always, on the trip down, she remembered her first descent down to the pit. It had been as an apprentice to the old witch charged with caring for the candy cottage before her.

She shuddered remembering the first time she’d seen what dwelled at the bottom of the stairs. To this day, herself now the old witch in the gingerbread house, luring children with the promise of sweets and chocolate, it was a memory that often woke her screaming in the night.

Rosina unbarred the door, though she wasn’t sure why she barred it at all. An iron bar wouldn’t stop them. Nothing would stop them. Well, almost nothing.

She pushed through the door.

The door opened to a rock outcropping, upon which sat a hate-carved stone alter. An immense hole, grave black and spattered with glowing red like hell extinguished, yawned before the offertory.

Rustles and shrieks crackled in the pit’s darkness as she scanned the ledge floor where she stood, rough-counting the scattered bones. It appeared they were finished with the sweet, young girl. She began gathering the pieces of picked-over skeleton, gleaming a sharp yellow-white in the light of her torch.

The witch, arms loaded with bone, glanced one final time over the edge, at the burning embers below, before she made her ascent. With her red eyes, she alone in the world knew they weren’t hot coals in the dark.

They were the eyes of evil. Devourers of the sinless. Birthed in hell.

Light from the moon shone through the clear sugar panes of her windows and Theo squawked. William had been cooperative, desperate for release. Desperate to see his mother and father again.

Back aching, she pushed herself up from the rocking chair and, once again, with the rising of the full moon, she would feed a child to the World Demons. She would save humanity from their worst sins made flesh and razor clawed. For each of over 2000 full moons, she’d sacrificed the babe-flavored innocence of one child so that many may live torment-free for another cycle.

Even so, those sacrifice tore at her. Tore at her like demons born of another ilk. The eager thought of her estranged children’s descendants living to see another moon because she fed young flesh to monsters — Even that comfort failed in making the duty lighter.

Walking to the window, she gazed out the sugar pane, imagining the ethereal mist giving way to bright moonlight, and envied the quiet peace of the forest. She craved its simplicity.

“What do you think, Theo? Would it be better to just quit? To allow the hell beasts to open their jaws and shred our age?” She glanced over to the crane as it speared, then gulped down another herring.

“I thought you’d say that.”

Rosina felt around the edge of her little table where her cane leaned, grabbed it, and hobbled to the back door.

“Fly, my friend.” She called over her shoulder, “Begin your quest to find the next.”

It was dawn when Rosina emerged from her cellar. She was dirty and sweat-smeared from feeding the coal fires, mentally exhausted from blocking out the screams, glad for the forest breeze clearing out the stink of roasting hair, heartened by birdsong replacing rending wingbeats and vicious shrieks.

Because of her, the teeming farmlands existed, unrazed and unaware. There was comfort in the thought after a night of misery.

She crossed the garden, plucking a pear for breakfast, and entered her sweet home. Eager to rest for the remainder of the day, she put on the kettle and crumbled a handful of dried alfalfa and violet leaves.

A long trill rippled through the silent morning forest. Theo had already found another lost child.

Relaxing her mind, Rosina focused on her Birdsight and found the perched crane. He’d found not one, but two children wandering her path. Brother and sister, she could tell. Her first thought was to the small victory — it would be two months before she had to disrupt another family. Some mother would have an extra month with her child.

She watched through the crane’s eyes as the boy bent and scooped up the stick of licorice.

“Gretel,” he called. “Over here. I’ve found another one.”

Leaning back in her rocking chair, the witch sighed. “Yes, children. Follow my Theo and I will feed you for the rest of your life.”